This is the Dave Butcher photo diary of a ski mountaineering trip to the Saas Fee area of Switzerland.

Black and white photographs and scans of my colour slides are used here to illustrate a 6 day ski mountaineering trip. Starting and finishing in Saas Fee in Switzerland we used a couple of mountain huts but the weather was really poor and we finished the trip early.

This was in the last week of April in 1998 and for the second year running I arranged the ski trip with the same 4 friends. We had all met on various ski tours and decided to organise our own trips, rather than go on those offered by guides or tour operators. The previous year we discovered we all had a loathing for polenta, a corn-based vegetable commonly served in mountain huts in and near Italy, so we called ourselves the ‘No Polenta Club’ or NPC for short. We met up in Saas Fee with the plan to ski as many 4000m peaks as possible in 6 days, ending in Zermatt. Jon, our guide, thought 4 or 5 may be possible but in the end we were lucky to manage two and one 3000m peak due to the appalling weather and we never left the Saas Fee area.

I was keen to try my new touring skis in anger (I had already used them for a week of piste skiing at Val d’Isere a couple of weeks earlier). They were Salomon X-Mountain skis with Fritschi Diamir ski mountaineering bindings. They were great!

If you would like a memento of your trip or a gift, all of the black and white images are available as fine art black and white prints. All of them were taken with a Mamiya 6 camera on Ilford 120 film and are available as high quality hand made darkroom prints in a range of sizes from 40x30cm to 70x70cm (size refers to mount and frame, image is a few cm smaller).

They all have a 6 digit number at the end of the title to uniquely identify the negative to help ordering – just type this number into the search box in the World Landscapes Gallery and it will show the image and ordering information. Not all images are included so if you can’t find the ones that interest you just send me an email using the Contact page form on this website and we’ll sort out the details between us.

Jan drove me to Manchester airport and I flew to Geneva where I caught a train to Visp and then a bus to Saas Fee.

We were staying at the Hotel Marmotte and I met up with Lovejoy after I arrived.

On the Friday there was just Lovejoy and myself to ski but we were joined by Mark and Phil after we returned to the hotel. Saturday all 4 of us skied and we met up with Graham, Jon and Jim early evening at the hotel.

We had a late start since the clouds were quite low. We took the lifts and then the funicular train inside the mountain to the Mittel Allalin station (3454m). We geared up inside the building because of the wild weather and left here at 10.15am. It was a steady climb upwards and the weather slowly improved, the clouds rose above the peaks and we could see where we were going. There was a narrow snow bridge across the bergschrund to reach the upper slopes. We left skis below the summit and walked along the narrow ridge to the summit cross of Allalinhorn (4027m). It was about 1pm. I took a few black and white mountain landscape photos from the top despite the flat lighting, especially of Alphubel (4206m) and Rimpfischhorn (4199m) which were the closest peaks. We skied back down through the icefall to the tops of the ski pistes and reached the Langfluh hut (2900m) at 2.30pm.

I was hungry so I had a plateful of Rosti, which was excellent. Little did I know that the evening meal for everyone staying in the hut was the same thing! So I had Rosti twice within a few hours. The lunchtime portion was best, the  texture had softened in the evening. We slept in the dormitory above the restaurant area.

The weather was appalling, a complete white-out. We waited to see if it would clear but it didn’t so skiing up Alphubel was out of the question. The hut was closing because the ski area was closed for the day so we made our way across to the Britannia hut (3030m). We left Langfluh around 11am and skied up to the Felskinn tunnel. After a snack lunch standing in the tunnel we made our way up to the skidoo track to Britannia by head torch since the tunnel was otherwise pitch black. We put our skis on inside and then made our way out into the storm. At about 2pm we arrived at Britannia hut. It was very windy and snowing hard. Not many people in the hut though, they all had more sense!

The weather was a little improved, but not enough to continue our planned itinerary. Instead we made for the closest peak to the Britannia hut, the Fluchthorn, to do a day trip. We left a bit after 8am and skied down for a few hundred yards and then put skins on. There was over a foot of fresh snow and we made it to the rocky top of the Fluchthorn (3790m) by 12pm in the clouds. We came down through really steep deep snow at first then a good ski back to reach the hut about 1.30pm. We had the route to ourselves. The 2 other groups in the hut both went to do the Strahlhorn but turned back at the Adler Pass because there was so much fresh snow.

We awoke to a day that was clear as a bell, we could see stars overhead. We left the hut just after 6am and skinned up to reach the Adler Pass (3789m) at 10am. We had clear blue sky all day. I took lots of black and white landscape photos as the scenery was fantastic. The slopes just below the pass were steep sheet ice and they needed some care to side-step up to reach the level ground above. There was lots of snow on the col. From here we skied up the ridge to the Strahlhorn. Nearest the pass under the few inches of fresh snow was treacherous blue ice. It was very difficult doing kick turns going up (and even more difficult coming down). After this it was an easy skin to the top. Here we took off our skis, roped up and walked the narrow ridge to the summit of the Strahlhorn (4190m) which we reached at 11.15am. I took a few more black and white landscape photos from the top and we set off down at around 12pm. We returned the same way but cut down into the corrie before reaching the Adler Pass. This didn’t avoid all the blue ice but it did give us an excellent ski down in pristine deep fresh snow. The ski down was fantastic and lasted about an hour and a half. Finally we skied down into a cloud bank near the hut and had about 30 minutes of uphill skiing to reach the Britannia hut again. We reached the hut about 2.30pm.

The weather was dreadful again and the ski area was shut once more. We decided to finish the trip 1 day early and just ski down to Saas Fee. We managed to find a way down to get very close to the village of Saas Fee before we needed to take our skis off and walk, even though the lower pistes were pretty much gone. We had a quick celebratory drink with Jim Blythe, who had now completed his UIAGM Mountain Guide qualification and then Jon and Jim left us to our own devices.

Everyone else decided to leave for home in the morning as the weather forecast was poor for Friday 1st. However, my flight home wasn’t until late Sunday so I decided to stay on in Saas Fee for another 2 nights which gave me a day skiing and a day trip to neighbouring Zermatt.

I had a cold and felt a bit tired but I spent most of the day skiing. The weather was dull and the light was flat so I didn’t carry my big Mamiya camera. There was lots of fresh powder snow on the Saas Fee piste. It was great to ski fresh powder without a big heavy rucksack trying to spin me round. After this I spent some time wandering around Saas Fee village.

It was good weather so I decided to travel round to Zermatt to take some photos. I caught the bus from Saas Fee to Stalden and then the train to Zermatt, it was about 2 hours each way. I wandered through the town and down into the old part and took quite a few black and white photos. From here I walked to Winkelmatten and then up to the hamlet of Findeln, one of the best viewpoints for photos of the Matterhorn, with a small chapel in the foreground. Unfortunately, the Matterhorn and most of the high mountains were in the clouds even though there was some brightness where I was, so no big views. From here I circled round and returned to Zermatt station to complete my 5 mile walk. Then it was back to Saas Fee using the train and bus for a few more photos around the old part of Saas Fee which was now in sunshine.

After breakfast I caught the bus to Visp and then the train to Geneva Airport. Jan met me at Manchester Airport and drove me home to the Peak District. 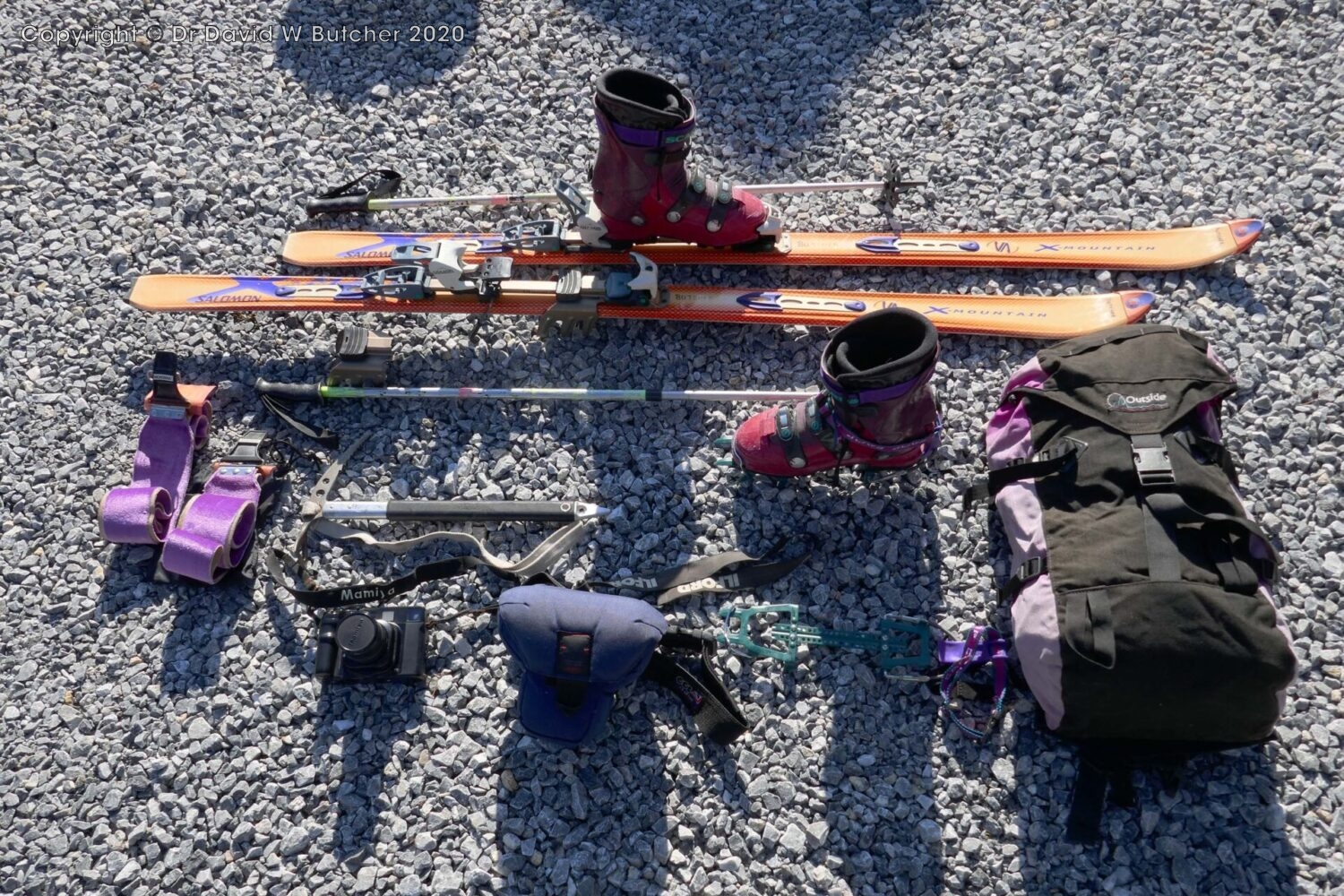