Over the years I have hiked, skied and snowshoed in many places and usually kept a diary of the trip. I have created web pages for quite a few of these and included a lot of photos, mostly black and white but a few colour ones too. Many of the photos are in the Landscape Galleries but if you see a photo that interests you there will be more background information in these trip logs and diaries. The trip logs and diaries are all at the bottom of this page with Walks and Photo Trips first followed by Ski Mountaineering, Skiing and Snowshoeing.

Dave Butcher has been selling his darkroom photographs since the mid-1980’s and working as a full-time professional photographer, darkroom printer, author and lecturer since 2004.

He is one of 6 Ilford Master Darkroom Printers 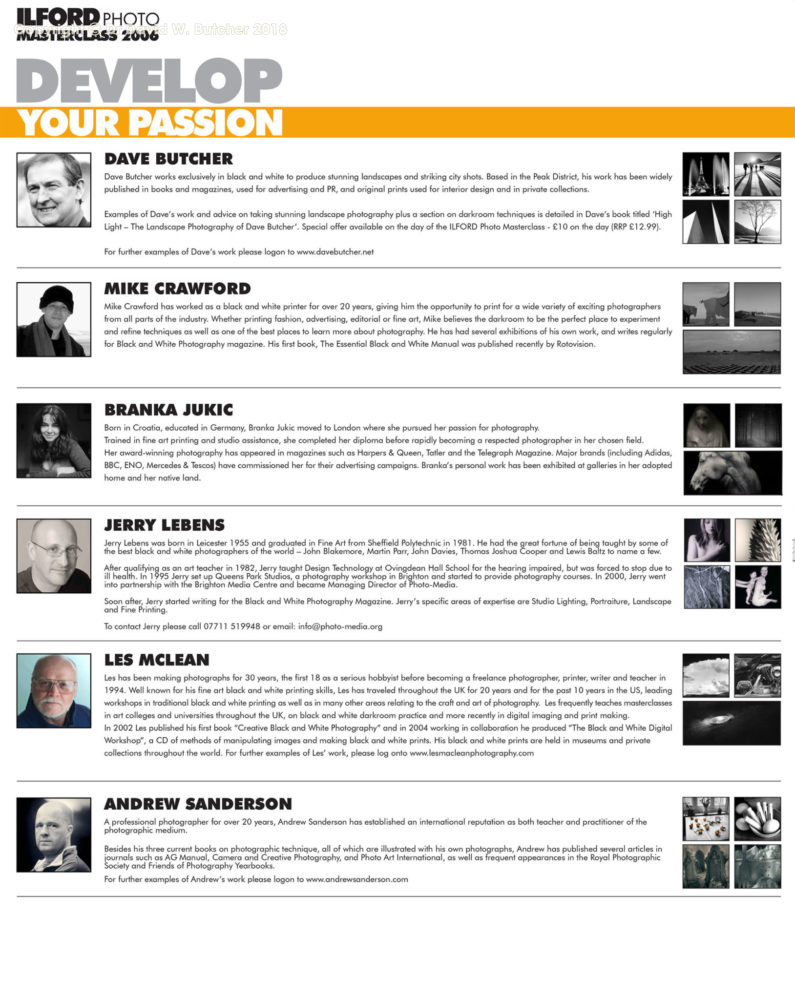 Dave also gives Ilford Darkroom Masterclasses and lectures to Colleges and clubs in the UK, as well as running bespoke courses on Black & White Landscape Photography (for film camera users) and Darkroom Workshops throughout the year.

His work has been used for Image licensing since 1999, including International Graphics Walmsley GmbH for large fine art prints, Hallmark for greetings cards and Trends International for calendars.

I worked for Ilford Photo Ltd. for 21 years, the leading manufacturer of black and white photographic films and papers, as a photographic research scientist, technical service manager, regulatory affairs manager and project management, the last 3 all at the same time! While I was doing that I managed the Ilford photographic printing department and setup and edited some Ilford technical newsletters (I wrote almost 150 technical articles for two publications in 5 years). Unfortunately, I had to leave Ilford in 2002 because of a chronic back injury.

First website December 2003 for my photographic portfolio and my 4th website took over in December 2017. During this time I was generating a lot of new technical information and starting to make technique videos so a new website, DarkroomDave.com, was created in 2014 to keep all of this in one easy to navigate place.

First black and white film – 1970, processed using solutions that I made from published formulae and raw chemicals (I was working as a technician in a chemical lab. at the time).

First experience of setting up and running a photography and darkroom service 1973 to 1977, for both black and white and colour, while I was working for Unilever Research Ltd. at the Frythe near Welwyn in Hertfordshire.

Lectures on my photography since 1988, to camera clubs and other organisations, all illustrated with darkroom prints.

Secretary High Peak Artists 2017-2021, a co-operative of artists running Gallery in the Gardens in Buxton, Derbyshire.

My grandmother gave me my first camera when I was about 5 years old, a Box Brownie and a Kodak Brownie 44A followed in about 1960.

Ansel Adams, the master of creative black and white landscapes of Western America. 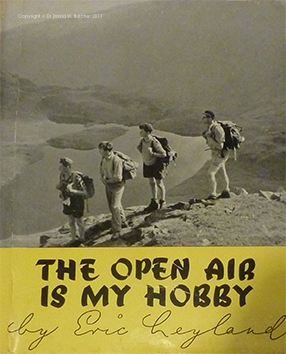 ‘The Big Walks’ by Ken Wilson and Richard Gilbert, a book received as a gift in 1981 on mountain adventures in the big mountains of Scotland in particular. This indirectly led to climbing all 284 Munro’s of Scotland (the highest mountains in Scotland) and then to mountains further afield around the world. Now I plan my own big walks! 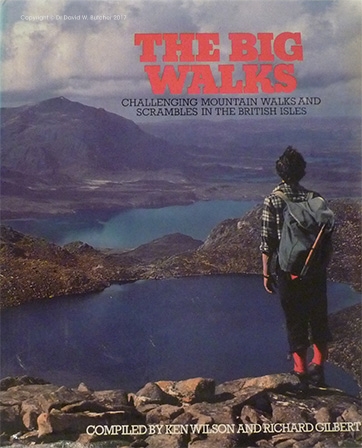 Snowdonia 3000 foot mountains 2015. We started in Conwy and walked to Llanfairfechan, Bethesda via the Carnedds, Pen y Gwyrd via Tryfan, Beddgelert via Snowdon, Tremadog via Moel Hebog, Blaenau Ffestniog via Cnicht in torrential rain, Capel Curig, Conwy. 97 miles, almost 10,000 metres of ascent over 8 days including 7 of the 3000 foot mountains in Wales; 7 days of rain so very few proper photos with my Mamiya film camera!

Lake District Northwest Trek 2016. My bad back was recovering from a really painful spell from Summer 2015 so good friend Al and I just did a 5 day trek around the Lakes keeping the days as short as possible. Even with my bad back we still managed 50 miles and 11 mountains/hills in 5 days. Several new black and white images to add to my photo library too, unlike Snowdonia last year!

Missing Link Trek, Milngavie (start of West Highland Way) to Kirk Yetholm (end of Pennine Way) 2019 I walked from Milngavie to Kirk Yetholm to join the 2 big UK treks that I have done. It was 143 miles over 10 days, split into two 5 day trips.

Hebden Bridge to Tunstead Milton Trek 2019.  In October 2019 my wife Jan and I walked from Hebden Bridge in the Pennines along the Pennine Way and other tracks and paths to Edale and then home to Tunstead Milton. It was a total of 67 miles in 6 days and there was very little rain but the weather was mostly dull. The trek log is illustrated with colour photos taken on my mobile phone, I didn’t carry my Mamiya 7 film camera. 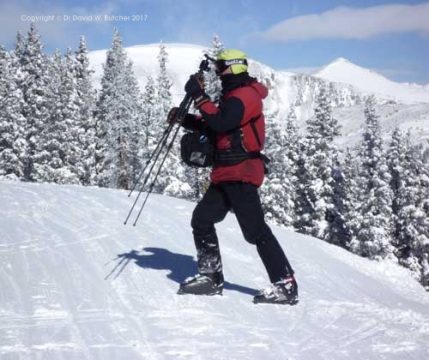 Leukerbad, Daubenhorn and Lammeren hut 1999, just one peak in bad weather – Daubenhorn. Tore knee ligaments in crusted snow in a blizzard the following day which finished the trip early for me, 2 days.