This is the Dave Butcher photo diary of a ski mountaineering trip from Argentiere to Trient.

In 1992 I booked on a ski mountaineering course with Glenmore Lodge in the Cairngorms. Unfortunately, It was cancelled due to lack of snow so, having built up to doing such a course I looked elsewhere for one. I booked with Peter Cliff for a 6 day course based in Argentiere ending with a 3 day tour.

The weather was hot and sunny making for difficult snow conditions – lots of heavy ‘porridge’ snow away from pisted areas.

Kieran (a London Underground engineer), Ed (a management consultant living in Coniston), Peter (a forester), Sheila (a GP from London) and me, Dave Butcher.

We spent the first 3 days being taught how to ski difficult snow, which we all did quite badly! On the second day we went to the top of the Grand Montets lift and attempted to ski down the icy mogul slope. Peter Cliff stopped us part way down and told us how badly we were all skiing and that if we fell over on the next section we would go down a crevasses and die. Not the best way to put our minds at rest, this course was the first time skiing off-piste for most of us. This made us ski more slowly and carefully. We skied around under the cable car through loads of avalanche debris to the Bochard piste, the easy bit compared to what had gone before. We repeated the exercise but on the second time down from Grand Montets headed for the Argentiere Glacier, the sun had softened the surface and it was much easier. We came down through the icefall and crevasses to reach the Lognan lifts. It was exciting and we wanted more but practised using avalanche transceivers instead. Shirley was not going well, her arthritic hips were preventing her from skiing well in the difficult conditions and PC decided that she would be unable to do the tour and told her she would have to stay behind. Sheila had joined the course knowing this was a possibility and was disappointed but not surprised. Kieran looked very stylish with his feet looking as if they were bolted together but unfortunately this style meant he was not very stable off-piste where a wider stance would have helped. We should have done a 1 day tour from Brevent but when we arrived from Argentiere it was shut for maintenance so we made for Flegere. Peter had a run in with the lift staff over him travelling free as the mountain guide with our group. He was not happy after this and we stopped at the top for a tea break so that he could relax a bit. Then up to L’Index for a tour to Brevent. Just as we were about to start a series of avalanches came down the slopes under which we should have skied. We would have down there if we hadn’t stopped for a tea break! The plan changed again and we practised digging snow pits to test the snow condition and then skied around Flegere for the rest of the day as preparation for the 3 day tour coming up.

This ski tour was my first ski mountaineering trip in the Alps and lasted just 3 days in May 1992, previously I had skied 3 Munro’s as day trips and done a few weeks in total of downhill skiing, mostly in Scotland and 1 week in Austria. The weather was sunny and warm most of the time.

The day started by taking the Grands Montets lift (3250 m) from Argentiere (near Chamonix in France). From here we skied down to the Argentiere Glacier, put skins on and skied up to the Glacier du Tour Noirs to practice using skins on steep ground. Kieran slipped down the slope and Peter went down to help him back up. There was ice under a thin layer of snow which made it quite slippery. Our first night was spent in the Argentiere Hut (2771 m).

We left the hut at 6am and walked down the slope carrying our skis over solid rutted ice. We put skis on and headed down a steep icy slope, traversed around some ice banks and a bit further down the Argentiere Glacier and stopped to put on skins and harscheissen (ski crampons) and started up the Glacier du Chardonnet. Kieran slipped again and went about 100m down the slope, he was having trouble getting the edges of his skis and harscheissen to grip.  Ptere went down to help him back up again while we waited. A group of Americans walked past carrying their skis on their sacs unlike everyone else that we saw and a few minutes later we heard shouting from above, one of the group had fallen down a crevasse and was saved from falling far by his rucsac. Peter returned and made a point of explaining how that probably wouldn’t have happened if they had been on skis to spread the weight. We reached the Col du Chardonnet (3323 m) and changed skis from uphil to downhill mode. While doing this I failed to notice that Tony had put one of skis partly over the top of one of my skis and as I lifted it up his ski shot off down the Chardonnet Glacier looking as if it wouldn’t stop until Argentiere High Street! Just when we thought all was lost the ski hit a divot, shot in the air and landed tip first in the snow. Tony was off like a shot and soon covered the 400 metres each way to be back with his ski. We hoped Peter Cliff didn’t see the incident or it may be unpleasant! One by one we abseiled come side-slipped down the east side, aided by a rope belay from Peter. Ed went second and found himself upside down at the top of the steepest bit – he said he hadn’t realised that the rope was still being paid out and as the rope he was holding tightly went slack he went with it head first instead of sliding his skis. We didn’t seem to be having a good day! Then we traversed around the Glacier de Saleina and stopped at the foot of the slope to a col for lunch. Then it was time for skins and up to the col – the Fenetre de Saleina (3261 m) and down into the bowl of the Plateau du Trient and the Col d’Orny below the Cabane du Trient (3170 m). From here it was a short climb on skis up to the hut for our second night. We were all very tired but Peter kindly volunteered us to unload a helicopter cargo net of hut goodies that was dropped as we sat on the terrace drinkning beers. Several trips later carrying cases and crates of wine, beer and food it was done and we returned to our beers. We had clear blue sky all day. The hut guardian was very friendly and looked after us very well although I was less than impressed with the cheese and tomato fondue that we all had for dinner. An allergy to dairy products and general hatred of fondue didn’t help!

Breakfast was just after 6pm and we put our skis on just an hour later. We skied down to the Col d’Orny  and around the plateau towards the Aiguille du Tour. We stopped, put skins on, roped up and started uphill around crevasses and ice cliffs, we had 2 ropes of 3. We headed around the side of the Aiguille du Tour (3544 m) to the Col du Pissoir (3177 m). From here we skied down the Glacier des Grands with breakable crust lower down then to the Glacier de Bron, very hot now. Then it was into a very unpleasant narrow gorge filled with recent avalanche debris. Kieran fell and took Peter Cliff with him, they both stood up and Kieran did it again. Peter was not amused. We removed our skis off and walked out, crossed the Trient Glacier torrent and followed the track past the Chalet du Glacier (closed) and on the last few miles down through the woods to Trient village (1279 m) where we ended our trip with a well earned beer.

Rucsack: Berghaus AB65 BC (far too heavy! Not in photo) 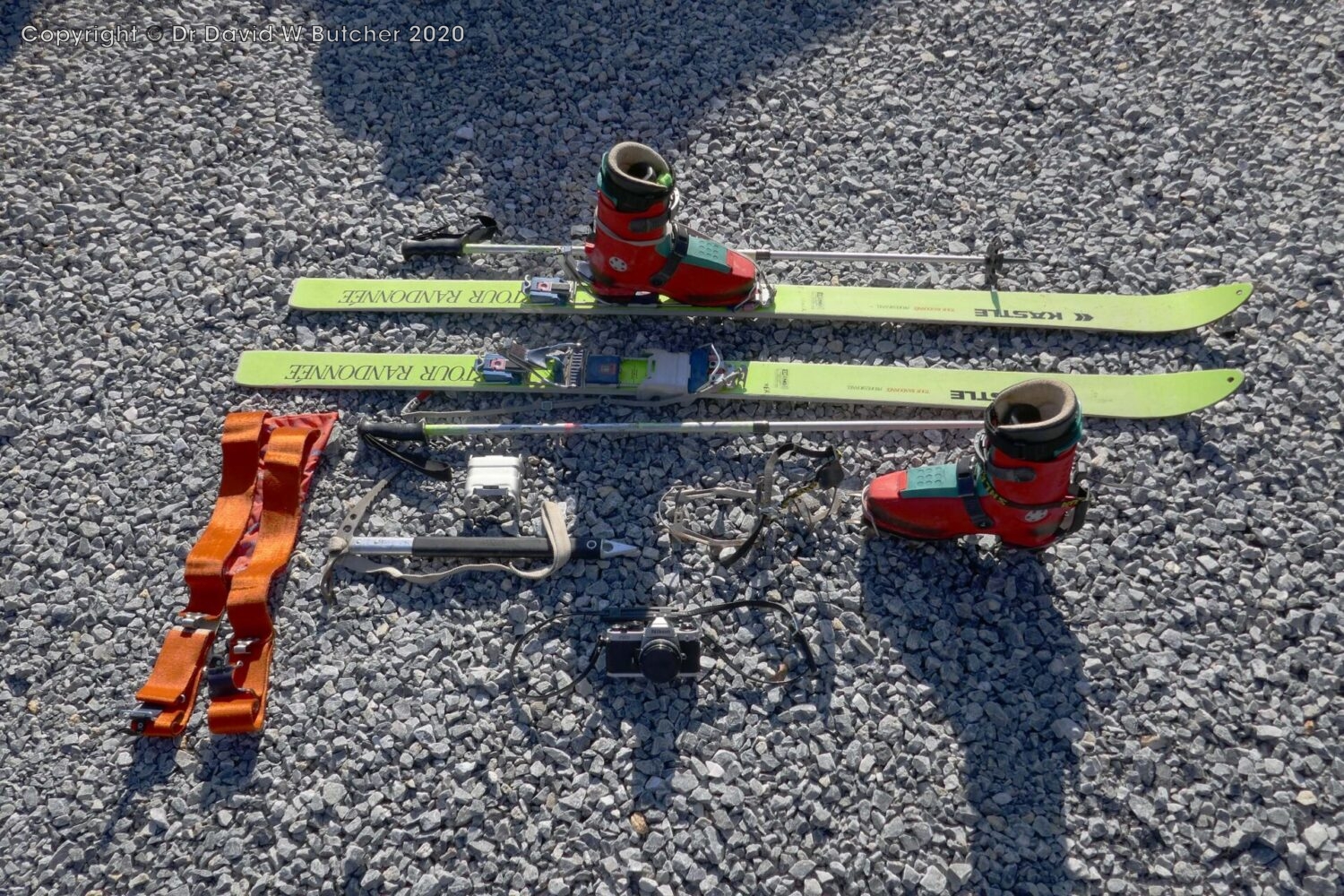 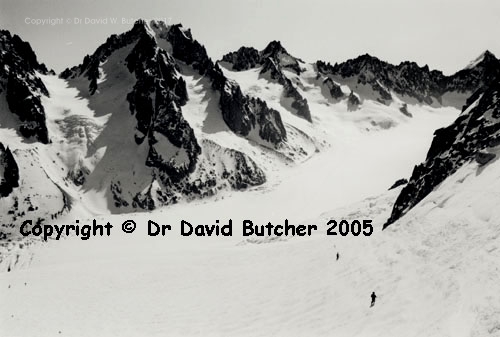 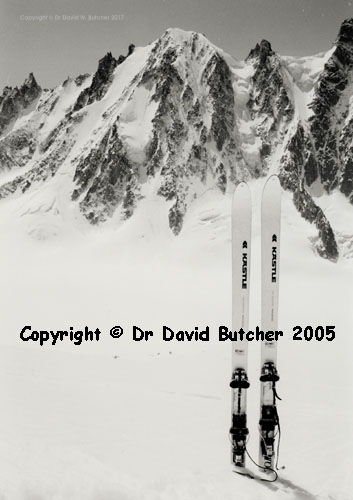 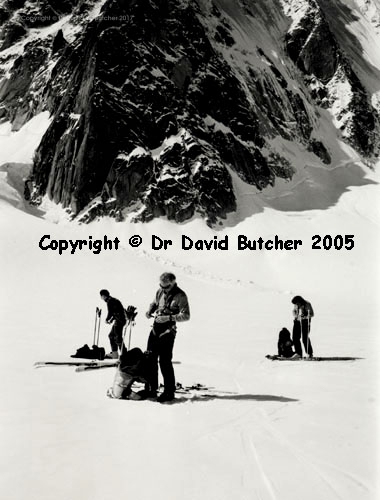 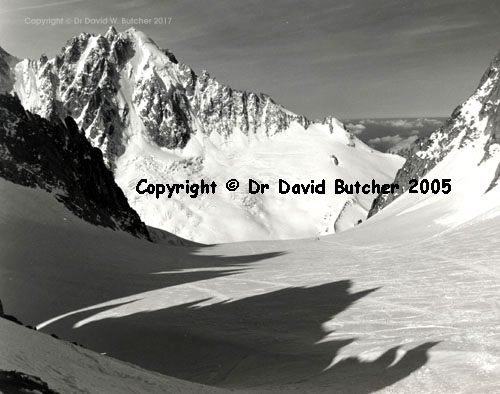 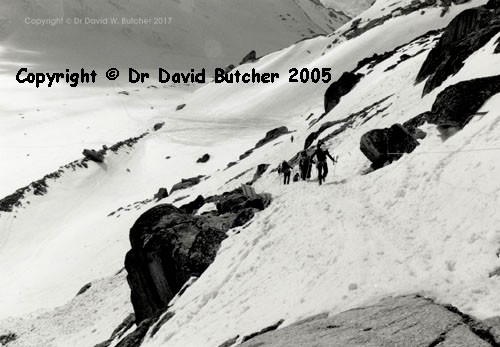 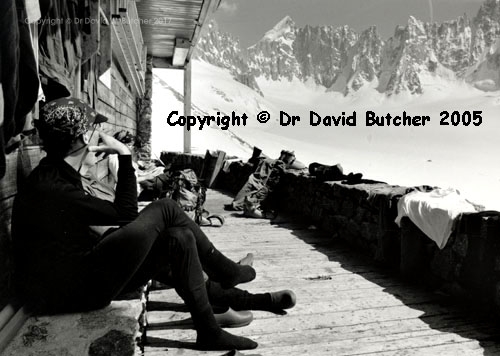 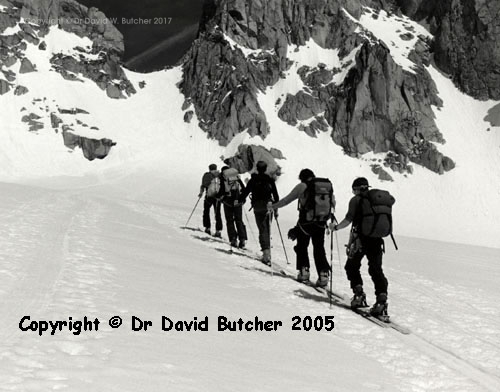 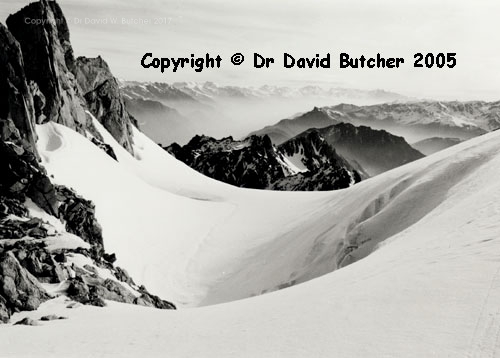 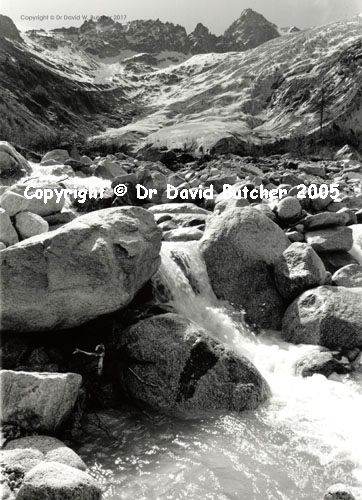 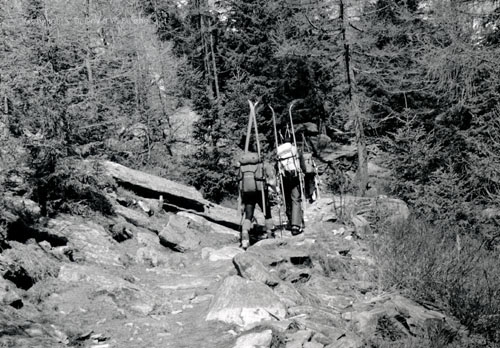