Yesterday was our second day in Amsterdam and it was a hot one at 26°C.

We had a late start after the late night of photography on Tuesday. We actually returned to some of the locations from Tuesday so that I could re-take them with blue sky and a few clouds.

Jan dragged my camera case, in cities I use a Peli 1510 wheelie case. It easily holds my 2 Mamiya 7 cameras and 4 lenses.

If I had known Amsterdam had mostly cobbled and brick streets which make dragging a case difficult I would probably have used my usual carry case and a rucsac.

We walked miles. Most of the good shots were in the south and west. It was dull in the centre when we were there.

I took quite a few rooftops with the short telephoto, 150mm lens. I don’t often use it but it was good for these.

Last of all I wanted to repeat the bridge shots from Tuesday. It was too dark when we reached the best location and I wanted more detail in the buildings behind the bridges.

The bridge and street lights came on at about 10.30pm. It was a lighter evening than Tuesday so I could take the shots I wanted and have more detail in the shadows.

Another late night, finishing after midnight. I much prefer doing night shots in the winter, I can start at 4pm and be finished by 6pm!

Today the forecast was for clouds and it’s sunny. A bonus day! 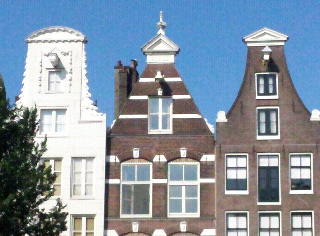