We recently had a couple of days in the Yorkshire Dales. We stayed in Catterick but visited Richmond on the first day so that I could buy a new pair of boots from the Altberg factory shop there. It was pretty constant rain the whole time we were there so no pictures.

The following day we headed for the village of Aysgarth and parked in the National Trust car park near the Upper Falls (£4.50 for the day). From here we went straight to the nearby Upper Falls, which are the ones you see from the road bridge.

With all the recent rain and snow melt they were in full flood condition, a raging torrent. 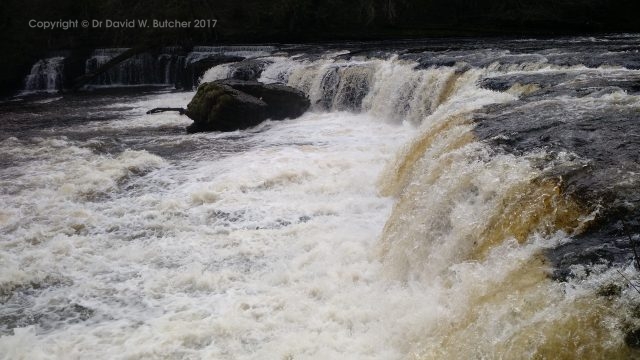 From here it was a short walk back past the car to the Middle Falls. I photographed these in August 2010 and managed to work my way along the river bank until I was beside the bottom of the Middle Falls. This time there was so much water I couldn’t even see the river bank nor where I took the photos from before as it was under several feet of water.

The main viewing area has a lot of foliage in front of it so even standing on the fence I couldn’t avoid twigs and branches in the shots. It’s much worse when the trees and bushes have leaves later in the year.

After another few hundred yards the track turned down to run alongside the river over some rock slabs. This was right next to Aysgarth Lower Falls.

It was then a longish walk to the Lord’s Bridge over the river. From the bridge it was a short walk to the Fox and Hounds pub in West Witton. Jolly nice local traditional Porter and friendly landlord.

We had walked about 8 miles which left almost 5 miles to go to return to Aysgarth.

The walk was just under 13 miles and took 5 hours, including pub stop and photo stops. It was mostly sunny but muddy and slippery underfoot.

I took 19 shots on 2 rolls of Ilford FP4+ 120 film. I will put some of the shots on my website after scanning the negatives. All photos here were taken on my Motorola Moto-X mobile phone.