Today we had wall-to-wall blue sky all day with near freezing temperatures.

This was to be our last day of the trip before heading home tomorrow (Thursday) and we decided to have one last coastal walk. One thing that we can’t do in the Peak District!

We headed west towards Combe Martin, parking a few miles east then walking the Coast Path.

It was a good walk but I didn’t take many photos, in fact just 8 shots all day. All with my Mamiya 7 camera, 65mm wide angle lens and Ilford 400 Delta at 500 ISO. All handheld, no tripod, travelling light.

The walk was a bit under 10 miles and took 5 hours so we weren’t rushing. I almost forgot to take a phone photo to illustrate this blog post but took just one from Great Hangman Hill looking east.

I used a Mamiya 7 camera exclusively, in fact I used 2 as the cable release socket on the first one didn’t work so I switched to the spare that I had packed. I suspect part of the metal screw thread of a cable release has broken off and blocked the socket. It’s so difficult to buy good quality old-fashioned screw thread cable releases!

I used 3 lenses. Mostly 65mm and 43mm wide angle lenses but I also used a 150mm short telephoto in Bristol. On using Google Street View for planning shots before leaving home I could see images across the river to the SS Great Britain that needed a short telephoto lens. These were the only shots that I used the 150mm lens for.

I took 2 tripods. Both Gitzo’s. One a series 1 that weighs about 1.5kg that I used around Bristol. It’s more sturdy and higher. The other is a series 0 that weighs about 1kg and I can carry when Hill walking. In fact on this trip Jan carried it when I decided I would need to use it for long exposure waterfall shots on Monday.

Best of all though, my bad back survived some pretty strenuous walks and the hardest I’ve done since July. All without taking any drugs. Fingers crossed I can keep it under control in the future. 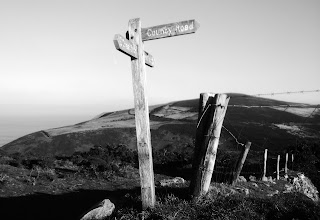