I decided that I needed some new snowy photos of the Lake District. In particular, Striding Edge on Helvellyn was top of the list. I took it in December 1984 on 35mm film and it’s my all-time best selling landscape image. I felt it needed updating on a bigger negative so that I could make big prints of it, maybe even a 1 metre vertical panoramic!

The forecast was not good. Heavy snow showers and strong to gale force winds, but with sunny spells around 2pm.

We started a bit before 11am for the 2.5h hike to the top. If the forecast was right I should get my pictures! There was snow on the ground from just above the Wythburn car park near Thirlmere and low cloud obscuring the view but we had good views and patches of sunshine every now and then. 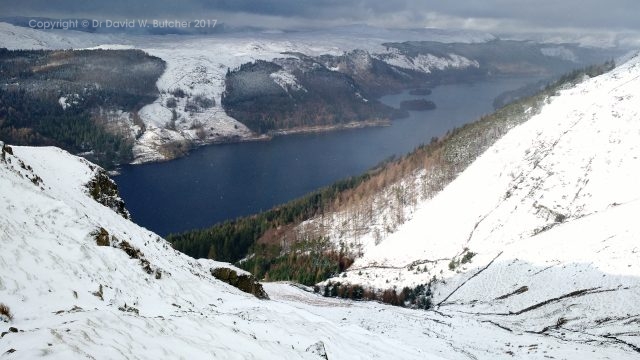 Above 2500 feet there was a lot of ice, we already had crampons on to make it easier on some of the lower slopes which had a mix of snow and ice..

We couldn’t see anything at the top. I took a photo of Jan standing by the Helvellyn summit trig point to confirm it! 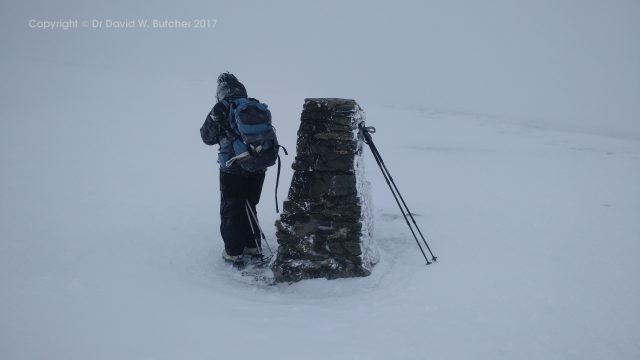 I took some pictures of Striding Edge but the phone didn’t record them. It kept shutting down, presumably because of the temperature, it was -5C with strong wind gusting almost gale force making it-15C with the wind chill.

I did get my new snowy photos on my Mamiya 7 camera of Striding Edge but you’ll just have to wait until I process the Ilford 400 Delta films to see them! I used 43mm and 80mm lenses with UV filters. The small amounts of blue sky were well above the mountain tops and wouldn’t be in the final prints so no need of orange or red filters.

We were on the top for almost an hour while I took my photos. It was a bit of a peep show with several minutes of cloud followed by a minute or two that was clearer, sometimes with sunshine. I took 17 shots in total, best part of 2 rolls of Ilford 120 film.

I mostly stayed in the same spot just behind the cornice looking directly down to Striding Edge. I lost feeling in my finger tips from removing gloves to change film and lenses. It took a few hours for them to recover. Jan was just standing around behind me and there was no shelter from the wind so she was getting cold too. It was time to go.

It took a bit longer than expected to return to the car as Jan’s right boot came apart making it impossible for the crampon to stay on. The sole was flapping from toe to heel. Jan adopted a one crampon style for the descent. Looks like we have to go boot shopping tomorrow!