A distinct lack of mobile phone signal meant no blogging for 5 days!

We returned home last night after running a 3 day landscape photography course in the Lake District. We were based in the spacious and very comfortable Stanley House bed and breakfast in Boot in Eskdale. This is a good base for the area.

We went up on Saturday and checked out the Stanley Force waterfall a short walk from our b&b. There was lots of water in the falls so that would be a good location. Rocks were a bit slippery though so we would need to be careful. Then off for a walk along the river before returning to our room. On the Sunday we went up Hardknott Pass at the end of the valley to check out parking and a few shots. Then up onto Hard Knott, the little peak just above the pass with pools of water, some still frozen. Good views from here to the Old Man of Coniston and the Scafell range, all with quite a bit of snow on the tops. Then down to the Hardknott Roman fort where there is still quite a bit remaining with walls complete on all 4 sides up to a height of over 6 feet. Then we walked up the hillside behind Boot and found a very shapely tree, a bit like a flue brush really, flat top and few lower branches! Nice waterfalls in Boot village. Then round to Wasdale to check out the car parking for some regular locations for me. There was sunshine and very nice light so I took a few pictures too.

Sunday we all met up in the evening in Stanley House to meet one another and for the course introduction from me and a short talk illustrated with some hopefully inspirational black and white prints. There were just 4 on the course as someone had cancelled through illness the day before (normally 5 on a course). Paul had been with me before in the Peak District, we met Alan at an art show in Sevenoaks in October and Ann and her daughter Sian met us at a show at Wellington College near Bracknell in November.

On Monday morning we started with a short walk to 60 foot high Stanley Force waterfall. It had rained overnight and was still grey as we walked in. The rocks at the foot of the fall were quite slippery. It was very photogenic and easy to take a good photo to get people started. Then lots to take along the stream on the way back, including a small bridge. Then up to Hardknott as the clouds lifted and the sun came out. Good views through to the hills beyond Wrynose Pass but the high tops remained in the clouds. Hardknott Fort was our last port of call for the day and the light was going rapidly as it was after 5 O’clock.

Tuesday had the locations furthest from our base, Buttermere and Crummock Water, about an hours drive away. This is pretty much the limit for courses based in Eskdale but it is quite beautiful with 2 large lakes, lots of shapely trees, rocks and waterfalls. The day was cloudy as we drove north but we were greeted with sun breaking through the clouds as we drove down the valley to Buttermere and it quickly cleared to blue sky and white fluffy clouds; days you dream of! We started with Buttermere then moved to Crummock Water after lunch at the Bridge Hotel. Lots of choice in what to photograph and all were in full swing picking out different things, not all lining up taking the same views!

Wednesday was forecast to be the best day so it was disappointing to see thick mist everywhere when we came down to breakfast. It didn’t thin out much as we drove the few minutes around to Wasdale so it was time to find some atmospheric locations where the mist would help us. The end of Wast Water lake nearest the coast has lots of trees, a small island and a boathouse; all good subjects for us. We spent quite a bit of time here before moving on to Ritsons Force behind the Wasdale Head Hotel (a half mile up the hillside behind the hotel!). This had lots more water than on Sunday and was spectacular. That was pretty much it. We made out way to the pub for a late lunch knowing that Ann and Sian would leave straight afterwards. Paul and Alan came back to Boot after lunch and we checked out the falls near the Mill. It proved almost impossible to stand up on the damp rocks so we retreated after Alan had taken a tumble.

Then it was goodbye to Paul and Alan to finish the course. All had long drives ahead of them.

Jan was taking group shots throughout and some are shown here to give a flavour of what we did.

Overall, it was one of the most entertaining courses we have ever run. Paul was a mine of useless information which couldn’t possibly be repeated over the dinner table mixed in with the odd gem. Ann and Sian were a very polished double act with lots of stories and quips to keep us amused all day. Alan was the quietest but came in with the perfect repost to bring the house down at just the right time. As far as the photography goes all were taking good shots from the start no matter what level they started from, often in difficult lighting. I will add some of their shots here and to my web site when they send them through. Paul and Alan were taking film so this could be a little while yet. As for me I took 18 rolls of 10 exposures so it was a pretty productive few days for me as well, mostly from the weekend before the course started but also a couple of rolls from each day of the course too, including some action shots in glorious black and white. It will be a while until I get to print them though.

Paul at River Esk in Boot 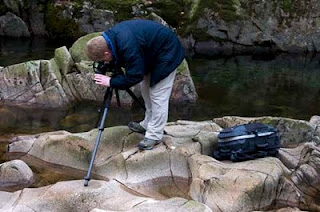 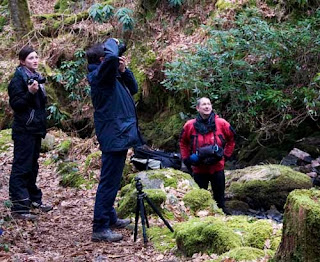 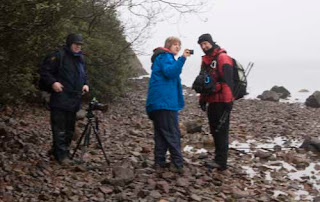 DB on wall above Boot 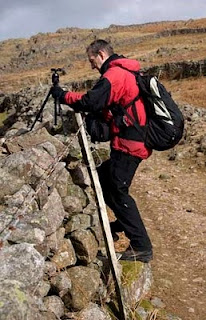 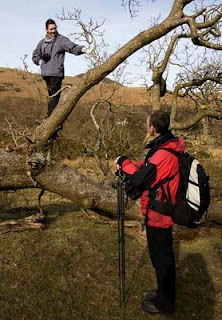 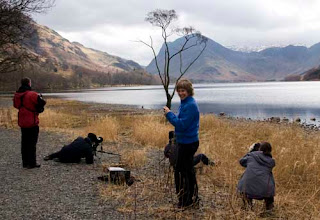 Buttermere and Ann and Sian 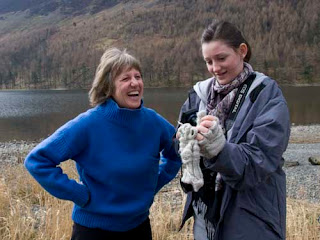 Buttermere with Paul, DB and Alan