Snowdonia Trek in the Sun!

25th July 2015
Today was the fifth of our 8 day trek around Snowdonia. It was also our first dry and sunny day!
We left our hotel in Beddgelert late, cooked breakfast wasn’t served until after 9am.
The first mile was through farmland then we were on a steep track up Moel Hebog. Bit of scrambling part way up too. Cold wind even when sun was shining.
Spectacular views from the top. I took a few shots on my Mamiya 7 camera. Nice sky so used an orange filter to darken it and put more contrast in the clouds. I was travelling light, just 1 camera and lens with 2 filters, yellow and orange,   and 6 rolls of Ilford 400 Delta 120 film, rated at 500 ISO.
The descent from the top looked easy on the map. The highest part was Access Land so we could walk anywhere. Then down steep rough terrain to an abandoned village and around a reservoir.
We were within 2 miles of the end of the day but paths marked on the map were nowhere to be seen. Our way was also barred by barbed wire in 2 places, and so on. We eventually made it to Tremadog at 4.45pm, rather later than expected.
Snowdon from Moel Hebog 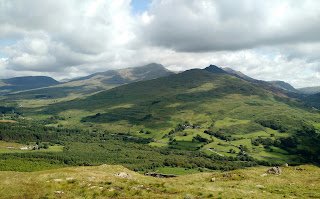 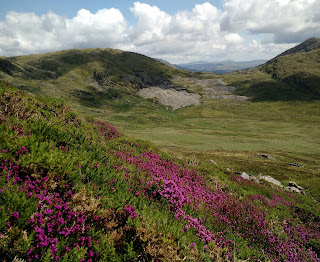 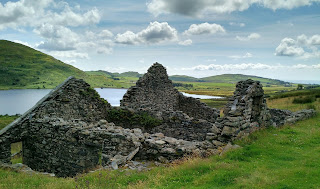 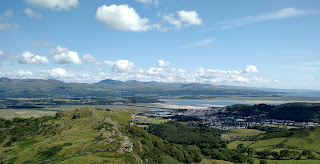