We had a trip to the Lake District in February so that I could take some new photos of Striding Edge in Winter.

There was snow from the car park at the Wythburn car park and conditions were fine until we climbed out of the shelter of the cove. Then all hell broke loose with near gale force winds, low cloud and snow and ice underfoot. Time to put crampons on. Soon we were on the summit plateau of Helvellyn. The low cloud meant there was no chance of any photos so we headed to the summit cairn and waited. We didn’t have to wait long. The strong wind was blowing the clouds across fast giving the odd break to a view beyond and patches of sunlight every now and then. 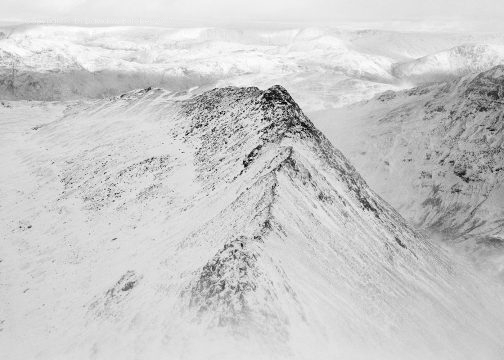 I headed over to the cornice above the slope leading down to Striding Edge at about 1.40pm. A route had been cut through the cornice and I could see the slope below so I positioned myself for the shot and waited. I started with the wide angle lens on my Mamiya 7 camera and Ilford 400 Delta 120 film (10 shots to a roll) but the clouds were too dense for the wide view. The standard 80mm lens was the better lens in these conditions so I switched. Both of the images here were taken with this lens, handheld. After about 40 minutes the clouds thickened and looked set for the rest of the day so we made our way down. 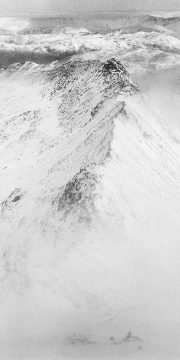 It was very cold, felt like -10°C at least, made changing film and lenses tricky as I had to take my gloves off and my finger tips went a bit numb. Bit tricky on the way down, Jan’s old Koflach plastic mountaineering boots fell apart. The front part of the sole came adrift from the upper so there was no chance to keep the crampon on that boot. We spent some time the next morning scouring Ambleside and Keswick trying to find some replacement winter boots for Jan. She takes size 2 or 2.5 usually so has to make do with size 3 or 36 boots, and 2 or 3 pairs of socks, but there are very few places that stock this size. We ended up at Needle Sports in Keswick and bought La Sportiva Trango Tower boots and Petzl crampons (Jan’s old rigid step in crampons wouldn’t fit the boots). The staff in Needle Sports were excellent and very knowledgeable. It was a good choice, from the Lakes we headed up to the Cairngorms where Jan wore the new boots and crampons on several mountain hikes with no problems at all.