We’ve moved on from the Lake District, now we’re in the Cairngorms, staying in Aviemore.

The day started with heavy snow but the forecast was for a bit of brightness in the afternoon. We decided to have a late breakfast and drove away from the hotel at the crack of 10.30am.

I thought we would spend the day walking or snowshoeing around Loch Morlich. Not enough snow for snowshoeing so we geared up for a walk, taking ice axes and crampons out of the rucksacks.

We spent about 30 minutes taking photos by the shore of the loch. All the trees were covered in snow and ice. It looked magical but a bit dull.

Then the sun started to break through the clouds, it looked like it was brightening up much earlier than expected. We put the ice gear back in the sacks, drove a mile or so to near Glenmore Lodge and walked up to the Ryvoan Pass in about an hour. 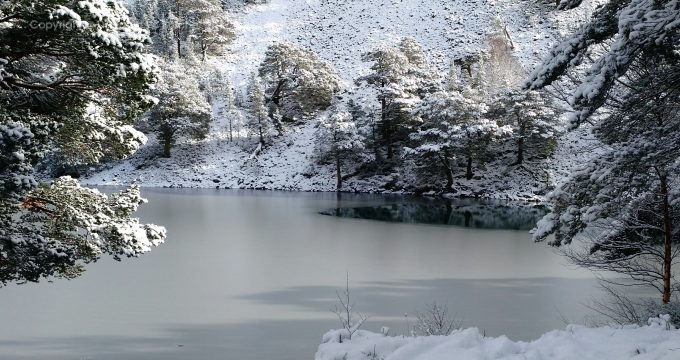 We were heading for Meall a’ Bhuachaille, a mountain opposite the Cairngorms Northern Corrie’s. It would be a good view across, as long as the clouds stayed off the tops.

It was a bit steeper from the pass but mostly snow underfoot. We soon put crampons on as it was a bit slippery and I didn’t want to twist my bad back. Deeper snow higher up but quite easy ground. 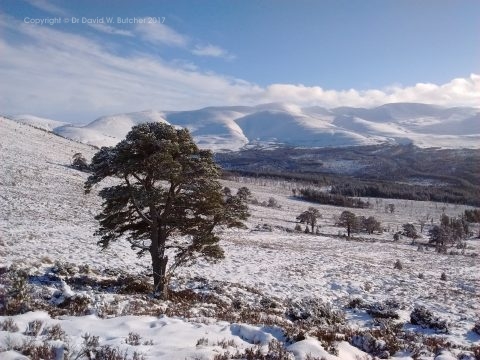 The clouds were down as we arrived at the top but quickly started to break up. The view was straight across to the northern corries, as expected. I took lots of photos as the sky changed. No phone photos at the top, it was too cold for it. 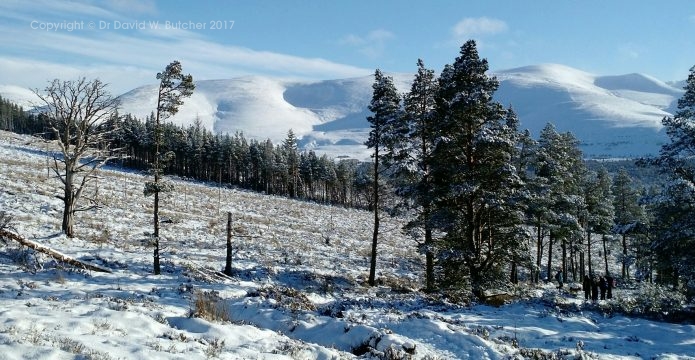 From here we followed the ridge down to the col and then straight down through the forest and back to to our car.

The Cairngorms were now cloudless! We returned along Loch Morlich and stopped a bit before the yacht club (no sign of life!). I took photos across Loch Morlich to the northern corries, first with the 43mm wide angle lens then with the 80mm standard lens.

I finished with a roll of Ilford FP4+ 120. The light was fading by this stage so I took the first  few with the UV filter in order to get a reasonable shutter speed for hand-holding. The last four I used the orange filter but had to find a suitable rock (half a mile along the shoreline) to support the camera as I was travelling light without a tripod today.

In total I used 4 rolls of Ilford 400 Delta and 1 roll of Ilford FP4+. That’s 50 shots in total on my Mamiya 7 camera, obviously quite a few duplicates as the conditions changed.

No idea what we’re doing tomorrow, the forecast for the Cairngorms is rubbish again!