The Obsession of a Landscape Photographer

In the summer of 2005 my wife Jan and I visited our best friends Rob and Annie in Boulder Colorado.

I had some locations in mind for photographs but needed to check what else was out there. Soon after arriving I bought a book from a local bookstore in Boulder to identify more locations. It was called Best of Colorado, by the excellent Colorado landscape photographer John Fielder. This had details of 165 scenic places, more than enough for our 3 week stay. Number 4 covered the Brainard Lake area of the Indian Peaks Wilderness in the Rockies, some 30 miles west of Boulder.

In 2005 I was using Mamiya 6 cameras, as I had done since 1993, but switched to Mamiya 7 the following year when Mamiya UK kindly loaned me 2 cameras and 3 lenses for 2 years. The bigger negative of 7x6cm and wider 43m lens (divide by 2 for the full frame or 35mm equivalent) really made a difference. It gives me 10 shots on a roll of 120 film and I often bracket taking shots in pairs in case there are flaws on negatives or one is damaged.

All of the shots shown here were taken on Ilford FP4+ 120 film, probably the best black and white film in the world! I also use Gitzo Mountaineer tripods, either a GT1541 or a lighter and smaller G1028, all with Manfrotto ball heads, for every photograph I take on dry land. They are the lightest tripods around but very sturdy.

Summer 2005, First View. After walking around Brainard Lake we stopped at the neighbouring and much smaller Red Rock Lake. It was a sunny day with good clouds and a bit breezy so no reflections. It was quite a view but something was missing! 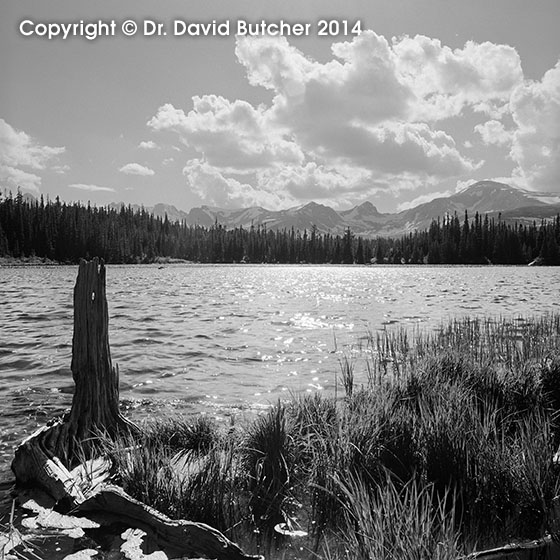 Next we stopped at the nearby bar for some much needed liquid refreshments as it was a hot day. There were a few colour photographs on the wall and one took my eye, of Red Rock Lake in winter, where we had been just a few minutes earlier. I had never seen trees look like this before. They were almost completely solid white, with a white frozen lake at the base of the shot but nothing of interest in the foreground and a blue sky, no mountains. It was clearly taken for the trees.

I knew at 90 degrees to the view in this photo there was a better shot for black and white. I wanted a frozen lake with interesting foreground detail, frosted white trees as in the colour shot, snowy mountains in the background and an interesting blue sky with some clouds. So began the obsession!

I have to say at this stage that all of my photographs have to be printed in the darkroom using traditional methods and my prints are as close to what I saw when I pressed the shutter button as is possible. I use camera filters to compensate for the over-sensitivity of black and white film to blue light and darken skies slightly when printing in the darkroom if the filter effect is insufficient. I never combine negatives, if it isn’t on the single negative I’m working from I don’t look for it anywhere else. If the shot isn’t right when I visit a location I keep going back until it is!

I needed to check that the shot I had in mind would work so we returned a couple of weeks later. After climbing one of the nearby peaks, Pawnee Peak (just under 4000m, 12,943 feet in old money!), we again stopped at Red Rock Lake on the way out of the Brainard Lake State Park. Once again it was a sunny day but this time no wind so there were reflections on the lake surface. I walked around the lake shore to confirm that the shot would only work from the end of the lake furthest from the mountains, anywhere else and trees blocked the view. I put it into memory, it would have to wait until we returned one winter in the future. 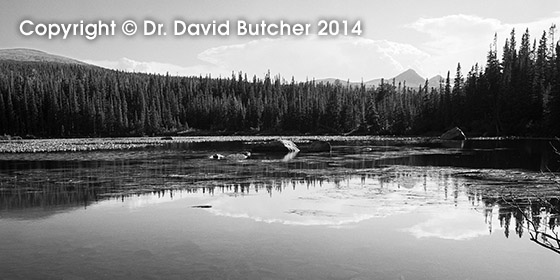 Winter 2009. So, three and a half years later we did return and made 2 trips to Red Rock Lake. On the first I didn’t even use the camera as it was low cloud and blizzard conditions so no chance of any shot, I just checked the location to save time in the future.

We returned 2 days later. It was a pretty good day as we snowshoed the 3 miles to the location but the clouds didn’t lift off the mountain tops and the trees weren’t frosted enough. I took a shot of the lake with a rock and snow formation in the foreground. I was missing the frosted trees, mountains and sky but at least the sun gave some brightness on the snowy lake surface. 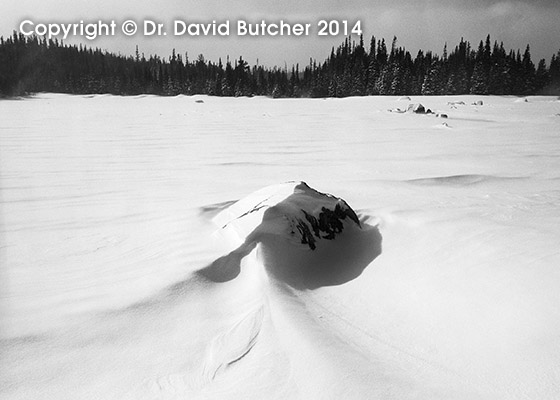 Winter 2010. The following winter we snowshoed 9 miles around 3 lakes in the area and Red Rock Lake was frozen  solid. Most of the snow had been blown off the lake surface and there was no frosting on the trees so the dark green conifers formed quite a barrier between the lake and mountains. This hike around the other lakes also confirmed that Red Rock Lake was the best location for the shot that I wanted. 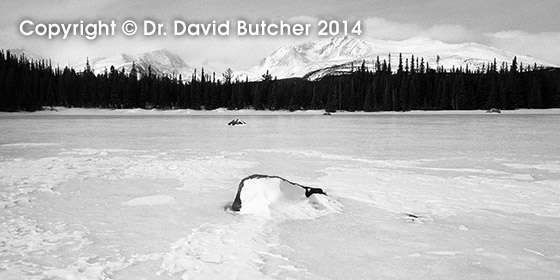 Winter 2011. The next year there was even less snow on Red Rock Lake, it was mostly thick ice, and no view to the mountains. We were thankful for the crampons built into our snowshoes or we would have been sliding around and falling over. No chance of the shot during this visit. 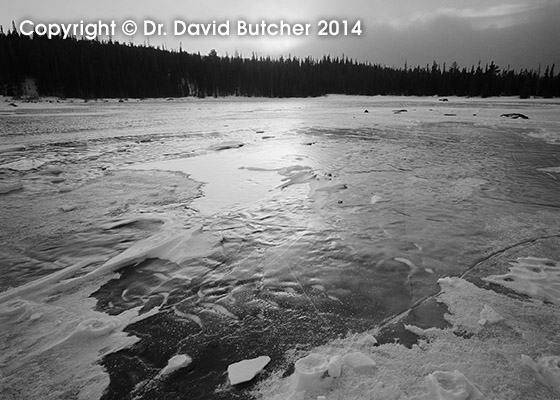 We could see that there had been soft snow on the lake surface at some time recently as there was a line of tracks left raised above the ice, made from compressed snow which then couldn’t be blown away when the wind blew leaving phantom tracks on the ice, shown here. 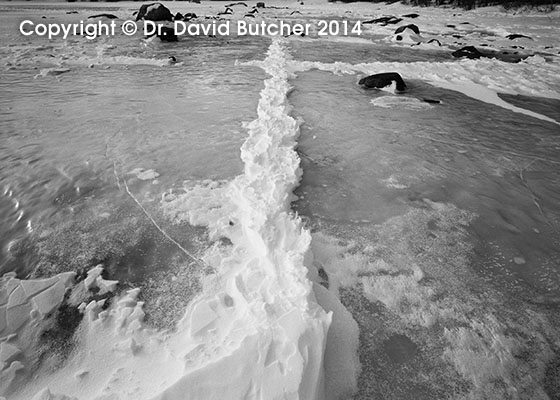 Winter 2012. Another winter and another visit to Red Rock Lake. It was a real blizzard and so bad in fact that Rob refused to get out of the car! We went without him snowshoeing through deep snow to the lake. It was bitterly cold.

There was surprisingly little snow on the lake and it was very windy. There was some frosting on the trees but not enough and no view of the mountains. It made a nice shot with the snow blowing in streaks across the surface towards me. There was more snow at the edge of the lake so that’s where I took the shot from for this visit. 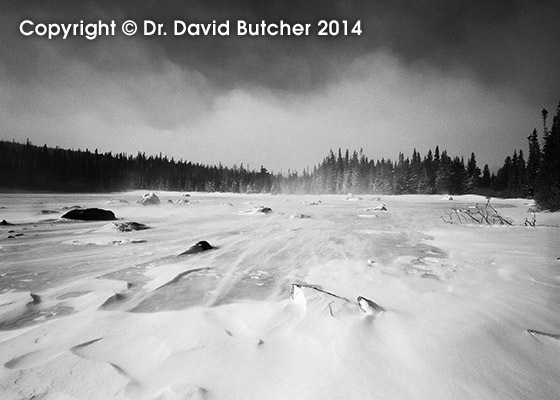 Finally, everything seemed to be coming together. It was a really cold blue sky day and fresh powder snow had fallen and was blowing around. In fact it was blowing so much that we came to a complete halt driving on the road near Brainard as visibility fell to zero. But it would take more than a blizzard to stop us!

Rob made it through and parked at the winter trailhead and I was quickly out of the car strapping snowshoes on and striding out over deep snow on the track. The others joined me later, taking a rather more leisurely approach.

I was rushing because I could see the snow being blown off the trees and I feared the white trees would disappear and I would be left with green ones again. The view was magnificent but it was extremely cold, at least -20C.

I often walk the hills with just 1 camera and one lens, usually the 43mm. However, on this day I also had a 65mm lens so that the mountains in the background would be more prominent in the final shot.

I took the first photographs on my 43mm wide-angle lens to match the shots from previous years. 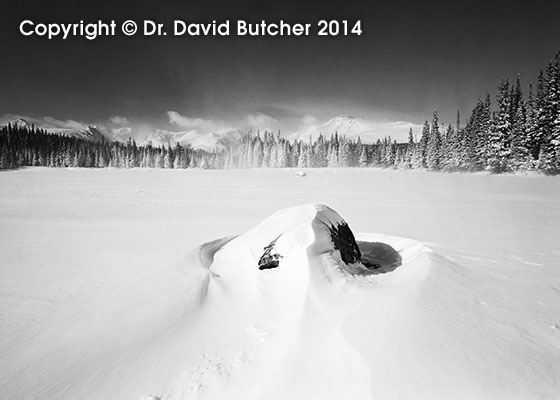 Then I took it on my 65mm lens, not as extreme a wide-angle. I used both orange filters and a new Mamiya polarising filter that I had never used before for landscapes. The 2 images shown here were with the polarising filter. The ones with an orange filter worked equally well but the mountains were  partly obscured by the blizzard.

Unfortunately, in the extreme cold the polarising filter didn’t turn very easily and I had to take the glove off my right hand to grip it to turn it for the darkening effect. Very quickly I lost feeling in my fingers and thumb. I tried to take a photo on my Samsung smartphone which I could edit to roughly match what I had taken on my proper camera, to illustrate a blog post. The touchscreen of the phone didn’t sense my fingers, I may as well have been touching it with a stick; it ignored me. Fortunately Jan took some on her Nikon D90 so I used these instead for my blog. It took 3 days for the feeling to return to the tip of my right index finger and thumb following the frost nip.

I took just 3 rolls over about an hour before snow blew into the back of the camera as I was loading the fourth. I could hardly feel my fingers on my right hand so I took this as a sign that it was time to finish. 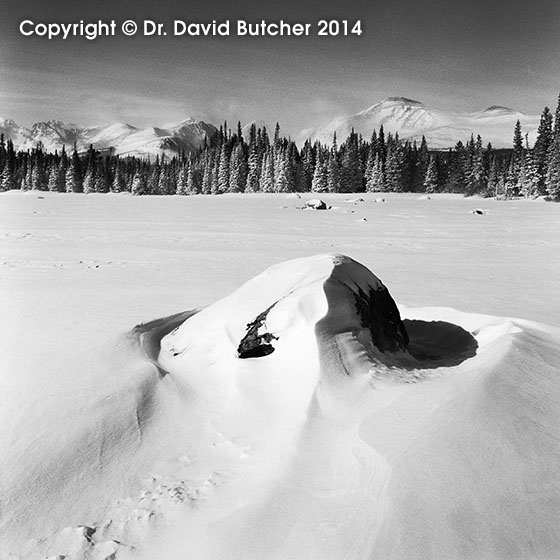 I like the effect of both lenses but the 43mm wide expansive landscape is closer to what I originally had in mind. Interesting foreground, snow-covered frozen lake, frosted trees, snowy mountains and an interesting blue sky with clouds, as well as powder snow billowing off the mountain tops.

So, just the 8 trips, 6 in winter, to finally succeed in taking the photograph I had visualised some 9 years earlier! Our friends are relieved too, I think they have seen too much of Red Rock Lake in winter!

The Obsession of a Landscape Photographer