Windy Day in the Cairngorms

Today we returned to Glen Feshie so that we could snowshoe up to the top of a Munro that we last climbed almost exactly 31 years ago! A Munro is a Scottish mountain over 3000 feet high. This one was Sgor Gaoith and it’s almost 3700 feet high.

The reason for choosing this one is that it is directly across the glen from Braeriach, the 3rd highest mountain in Britain. I thought I could try and take some new photos from this viewpoint, weather permitting.

The forecast was a bit grim. Gale force winds, -5C on the top feeling like-15C, and low cloud. We started in sunshine and had sunny spells all day.

The first part of the route climbs steadily through a forest but the track didn’t have much snow cover so we had to carry the snowshoes for over a mile before we could put them on.

View from the foot of Meall Tionail

Then we were quickly onto the open hillside heading for the small peak Meall Tionail. The wind strength increased considerably as we climbed, approaching gale force by the time we reached the small cairn after 2 hours. 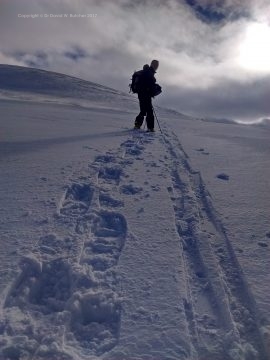 Jan decided the wind was too strong for her and retraced our tracks back to the car. At least it was clear at this level with visibility of several miles. I carried on as I could see glimpses of blue sky so hoped I could get my Braeriach shot.

As i moved away from Meall Tionail the wind dropped to 20 mph or so. It took me another hour to reach Sgor Gaoith. It was just before 2pm and there was no view but I waited and saw glimpses of Braeriach.

I also saw a Brocken Spectre and Glory while on the summit. My shadow extended beyond the cornice onto the clouds beyond (the Brocken Spectre bit) and then there was a circular rainbow (the Glory) around my shadow. As I stretched my arms out to both sides they seemed to touch the inside of the rainbow. I’ve seen them before in the winter but not for a few years.

I stayed on the summit for 40 minutes and ran off 2 rolls of Ilford 400 Delta 120 film (20 negatives). There was one period of about 2 minutes when I had a reasonably clear view with some clouds swirling around. I ran off a whole film as the view changed rapidly. Once again I lost feeling in my index finger and thumb tips changing film. Not as bad as last Sunday on Helvellyn though.

There was also a steep buttress leading to the summit with some spectacular snow shapes on the rocks so I used this in the foreground of a few shots.

Mostly I used my 43mm wide angle lens on my Mamiya 7 camera but I did take a couple on the 80mm too. The 43mm gave me better foreground options.

Unfortunately no phone photos at the top it was too cold for it to work.

I left the top at 2.35pm and headed down, roughly using the same route as I had come by. I couldn’t see any tracks but I just retraced the track on my Satmap Active 20 GPS.

As i reached the dip below the ridge I was caught in the most ferocious wind. It was at least gale force and judging how difficult it made walking it must have been gusting well over 40 mph. This continued until I was well down the slope from Meall Tionail.

Fortunately my Mountain Equipment Tupilak jacket (bought from a factory sale a year or two ago) has a bombproof hood for even the windiest days, it never budged from my head even when directly facing the strongest winds.

What gale force winds do to the view!

The last stretch was largely uneventful except that I had to refix the straps on one of my snowshoes. A couple of them came undone. I should have checked them before the steep rapid descent.

Jan walked back up the track to meet me and we walked the last mile together back to the car.

It took me just over 5.5 hours to cover the 8 miles, including 40 minutes taking photos on the summit. This compares with almost 8 hours to do the same walk, in similar snow conditions 31 years earlier. The difference was snowshoes. They made a huge difference, no sinking in to the soft snow, no post-holing.

I only saw 3 people, all ski tourers. One of which left the summit at least 10 minutes before me but he was just a couple of minutes ahead by the time we reached the forest trail. Skis were actually no faster than snowshoes today.

It was while doing this walk 31 years ago that I first saw ski tourers. They came down from the summit, skied around us and were out of sight in a couple of minutes. That led to us learning to ski tour, skiing 3 Munro’s and me doing lots of ski mountaineering in the Alps, including some 4000 metre peaks. Then as my bad back meant I had to stop ski mountaineering we replaced it with snowshoeing, much lighter gear than skis and almost no technique to learn so it’s very easy to do.

I love this walk, especially using snowshoes to make it easier and faster. On a clear day the views are spectacular.